Disability affects human beings all around the world. No part of the world is completely safe from disability. Similarly, we find Achievers with Disability in all corners of the world. In this article, we are presenting a few people from various countries who are famous for their achievements despite struggling with different types of disabilities.

Please note that this list is not given in any particular order. Also, we welcome suggestions for enhancing / growing this list. You can suggest more famous people with disabilities in the comments section.

Life and Achievements:Stephen Hawking (8 January 1942 – 14 March 2018) was one of the most famous scientist the world has ever seen. Prof. Hawking was confined to a special wheelchair mounted with a computer that used to speak for him. He had lost speech due to ALS. Prof Hawking was an eminent theoretical physicist who made significant breakthroughs about the functioning of the universe. Discovery of Hawking radiation is among several of his important scientific contributions. 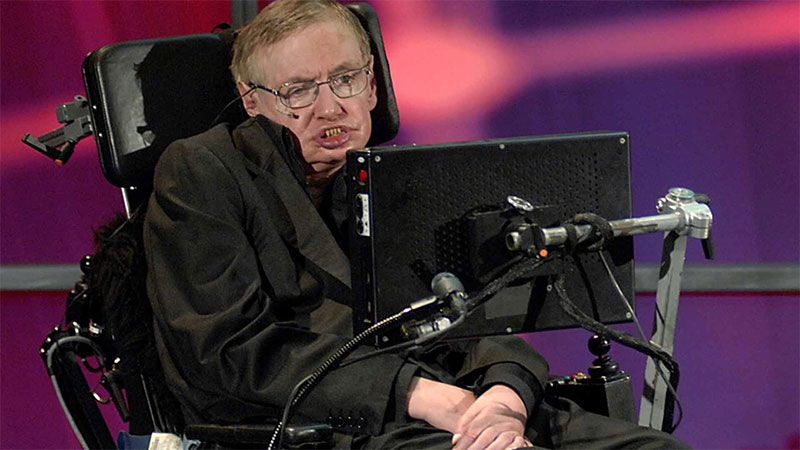 Prof. Stephen Hawking was elected a Fellow of the Royal Society (FRS) in 1974. He was honored with the Presidential Medal of Freedom, the highest civilian award in the United States in 2009. In addition, he received a long list of scientific achievements awards.

Life and Achievements:Helen Keller (27 June 1880 – 01 June 1968) is probably the best known icon of persons with disabilities. She became deaf-blind at the age of 19 months due to an unknown illness. Helen was taught to express herself by Anne Sullivan, her teacher who remained her life-long companion.

Helen Keller went on to become the first graduate with deaf-blindness in the world. Autobiography of Helen Keller, The Story of My Life, is considered a classic book in English literature. She traveled around the world and campaigned for antimilitarism, women’s suffrage, labor rights, socialism, and other similar causes. Helen Keller is most certainly one of the most famous disabled persons in the world.

Life and Achievements: Franklin D. Roosevelt (30 January 1882 – 12 April 1945), popularly known as FDR, was the 32nd President of the United States. In 1921, Roosevelt contracted polio and his legs became permanently paralyzed. Nevertheless he served as the President from 1933 until his death in 1945. FDR had immense impact on America as he successfully led the nation through the Great Depression and World War – II. In 1938, Roosevelt founded the National Foundation for Infantile Paralysis, leading to the development of polio vaccines. This foundation was later renamed as the March of Dimes.

FDR used a wheelchair but avoided being seen using wheelchair in public. Along with George Washington and Abraham Lincoln, FDR is considered among the best presidents of America.

Life and Achievement: Born on 25 September 1952 in New York City, Christopher Reeve was only 24 years old when he played the role of titular role in the 1978 movie Superman. After the release of the movie, the Newsweek reported “Christopher Reeve’s entire performance is a delight. Ridiculously good-looking, with a face as sharp and strong as an ax blade, his bumbling, fumbling Clark Kent and omnipotent Superman are simply two styles of gallantry and innocence.”

But all this changed when a horse-riding accident on 27 May 1995 crushed Reeve’s cervical vertebrae and left him paralyzed neck-below. Despite such serious spinal cord injury and resultant disability, Reeve marched on. He became a world-renowned disability activist. Reeve died on 10 October 2004  at the age of 52.

Nature of Disability: Born with tetra-amelia syndrome (doesn’t have arms and legs)

Life and Achievement: Nick Vujicic was born on 4 December 1982 in Melbourne, Australia. He was born with phocomelia, a rare disorder characterized by the absence of arms and legs. Despite all the struggle that came with such a disability, Nick graduated from Griffith University at the age of 21. He married Kanae Miyahara on 12 February 2012. The couple now has four children. Nick is a world-famous motivational speaker and is the founder of “Attitude is Altitude”.

Known for his indomitable fighting spirit, Nick easily makes his way into any list of famous persons with disabilities.

Nature of Disability: Paralysis in legs

Life and Achievements: Esther Vergeer has been the most dominant player in professional sports. She played professional wheelchair tennis and won 48 Grand Slam tournaments, 23 year-end championships and 7 Paralympics titles. She was the world number one wheelchair tennis player from 1999 until her retirement in 2013. Esther remained undefeated since 2003 until her retirement. Her winning streak stretched 470 matches.

Esther was born on 18 July 1981 in Woerden, Netherlands. Due to an illness that started in 1987, she became paralyzed in March 1990. She learned playing wheelchair tennis during her rehabilitation and turned pro in 1995. And today we know Esther as the most famous sportsperson with disability in the world.

Life and Achievements: Peter Dinklage was born (11 June 1969, Mendham Township, New Jersey, United States) with achondroplasia, a common form of dwarfism. Height of Peter Dinklage is 4 ft 5 in (135 cm). He went on to become a TV and movie actor in Hollywood. Dinklage is best known for his portrayal of Lord Tyrion Lannister on the HBO television series Game of Thrones from 2011 to 2019.

Peter Dinklage has won Primetime Emmy Award for Outstanding Supporting Actor in a Drama Series four times. He also has a Golden Globe award in addition to a long list of awards and honors to his credit.

Life and Achievements: John Nash (June 13, 1928 – May 23, 2015) was a world-famous mathematician. He won Nobel Prize in Economics in 1994 for pioneering analysis of equilibria in the theory of non-cooperative games. Nash was diagnosed with paranoid schizophrenia in 1959. Despite his continuous struggle with his illness, Nash excelled in the field of mathematics. He taught at the Massachusetts Institute of Technology, Princeton University.

Life and Achievements: Frida Kahlo (6 July 1907 – 13 July 1954) was a Mexican painter. She contracted polio at the age of six. The illness made her right leg shorter and thinner than the left. In 1925, Kahlo met an accident which further aggravated her disability. She spent most of her life in bed suffering severe pain. Nevertheless, Kahlo progressed to become one of the most famous painters and a cultural icon.

Life and Achievements: Born in Italy on 22 September 1958, Andrea Bocelli was diagnosed with congenital glucoma at the age of 5 months. He became completely blind when he was 12 years. Bocelli showed a great passion for music as a young boy. He learned music and became a world famous singer (tenor), songwriter, and piano, flute & fiddle player.

Singer Celine Dion has said that “if God would have a singing voice, he must sound a lot like Andrea Bocelli“. Andrea Bocelli was awarded the Grand Officer of the Order of Merit of the Italian Republic (Grande Ufficiale Ordine al Merito della Repubblica Italiana) on 4 March 2006.

Life and Achievements: Michael J. Fox (born 9 June 1961) is an actor, comedian, author, film producer, and activist. He starred in the famous Back to the Future trilogy. In 1991, at the age of only 29, he was diagnosed with Parkinson’s disease. In the year 2000, Michael founded the Michael J. Fox Foundation, an organization working to promote research toward finding a cure of the disease. The Foundation has invested more than $650 million in research.

Life and Achievements: The author of many children’s books including the world-famous Alice in the Wonderland, Lewis Carroll, lived with autism. The disorder affected his speech due to which he stammered while talking in social groups. He was also deaf in one ear. But, his disabilities didn’t stop him from excelling as a renowned writer and a storyteller.

Life and Achievements:Louis Braille invented a reading and writing system for the visually impaired people. This tactile system is known after him as Braille language. Louis Braille was blinded in one eye, at the age of three, as a result of an accident. Later an infection set in and spread to both eyes, resulting in total blindness. Braille began developing his touch-based code when he was still a student. He received a scholarship from the Royal Institute for Blind Youth. Braille first presented his system of code in 1824.

Life and Achievements: Who does not know the legendary heavyweight boxing champion, Muhammad Ali? Commonly known as the Greatest, Ali was one of the most significant and celebrated figures of the 20th century and as one of the greatest boxers of all time. But, very few people know that his first fight was against dyslexia. He was a great wordsmith whose many words are shared as motivational quotes but he could barely read due to dyslexia.

If you are a Hollywood movie enthusiast, you might already know that the character of Rain Man (1988) was based on Kim Peek. However, the real story of Kim Peek was quite different from that of the rain man. Kim Peek had a condition in which the bundles of nerves connecting the two hemispheres of the brain were missing. His unique condition gave him the ability to read two pages of a book simultaneously – left page with the left eye and right page from right eye. It took him just 8 seconds to read and memorize the two pages. With his astounding ability to read and remember, he memorized over 12,000 books in his lifetime. He was an expert in 15 subject-areas.

Johnny Deep, the famous Hollywood actor, most well-known for playing Jack Sparrow in the film series Pirates of the Caribbean, revealed in an interview that he can not see at all with his one eye and is near-sighted in the other. In a 2013 interview given to the Rolling Stone magazine, Depp said, “I’ve never had proper vision”. Depp has won a Golden Globe Award and a Screen Actors Guild Award, in addition to nominations for three Academy Awards and two British Academy Film Awards.

She is the most decorated Paralympic athlete ever. Trischa, Paralympic Swimmer from America, has won 55 medals including 41 gold in Paralympic games. In addition to being the most successful Paralympian ever Trischa holds many world records in her disability category. She was born with a rare condition called Aniridia that is characterized by abnormal development of the iris. Trischa has been legally blind since birth due to her rare condition. She was included in the Paralympic hall of fame in 2012. And, disabled swimmers in the USA are given an award in her name – Trischa L Zorn Award.

Infographic on Famous Disabled People in the World

You can easily display this infographic in your website / blog by using the following code:

You can easily display this infographic in your website / blog by using the following code:
<a href=https://feeds.semerusatu.com target=_blank><img src=https://wecapable.com/static/infographic/world-famous-people-with-disability.jpg></a><br><br><a href=https://feeds.semerusatu.com target=_blank>Infographic on World Famous People with Disabilities published by WeCapable.com</a>

This list of amazing famous people with disabilities from around the world is never-ending. I will continue developing it. Please contribute your suggestions in the comments box.

Table of Famous People with Disabilities in the World

"17 Famous People with Disabilities in the World."Wecapable.com. Web. August 10, 2022. <https://feeds.semerusatu.com/famous-disabled-people-world/>

"17 Famous People with Disabilities in the World." (n.d.). Wecapable.com. Retrieved August 10, 2022 from https://feeds.semerusatu.com/famous-disabled-people-world/

2 thoughts on “17 Famous People with Disabilities in the World”