Hemophilia is a blood disorder characterized by the lack of blood clotting proteins. In the absence of these proteins, bleeding goes on for a longer time than normal. Hemophilia almost always occurs in males and they get it from their mothers. Females are rarely affected with hemophilia. 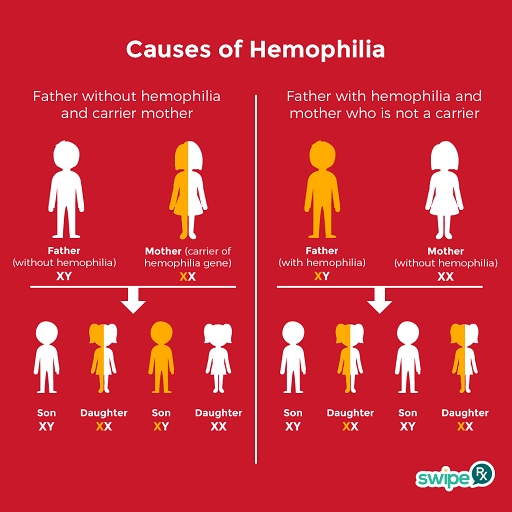 In case of female child, she will be a hemophiliac only if both the copies of the gene she gets, are mutated. This happens very rarely. Female child is more likely to get one mutated copy from mother and one normal copy from father. This normal copy of the gene will be able to produce about half of the normal blood clotting proteins — and that proves to be almost sufficient. But in rare cases, if both the copies of the gene she inherits are mutated — then her body will not be able to produce clotting factors and she will become hemophiliac.

Just as with other blood disorders (like sickle cell disease), you may be able to claim disability benefits if your condition hampers you from working. In India, hemophilia has been listed as one of the 21 recognized disabilities under RPWD Act 2016.

There is no known cure for hemophilia. The treatment for hemophilia involves injecting clotting factor into the patient — and this has to be done many times a week. Hemophilia treatment is expensive.