Parkinson’s disease (PD) is Central Nervous System disorder which affects movement. Parkinson’s disease is characterized by tremors and stiffness. It is a progressive disease, which means that it worsens with time. There is no cure available at present.

After Alzheimer’s disease, Parkinson’s disease is the second most common age-related neurodegenerative disorder.

Following are considered to be the cardinal symptoms of Parkinson’s Disease: 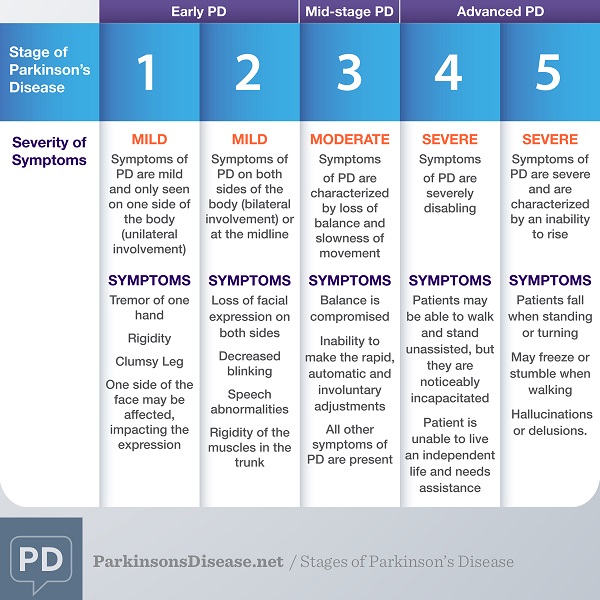 Can You Claim Disability Benefits for Parkinson’s Diseases?

Parkinson’s disease has been recognized as a disability in India under RPWD Act 2016. In the USA, you can claim disability benefits if symptoms of the disease are meet certain diagnostic criteria.

The UPD rating scale is the most commonly used scale in the evaluation of Parkinson’s disease.

I. MENTATION, BEHAVIOR AND MOOD

0 = None.
1 = Mild. Consistent forgetfulness with partial recollection of events and no other difficulties.
2 = Moderate memory loss, with disorientation and moderate difficulty handling complex problems. Mild but definite impairment of function at home with need of occasional prompting.
3 = Severe memory loss with disorientation for time and often to place. Severe impairment in handling problems.
4 = Severe memory loss with orientation preserved to person only. Unable to make judgements or solve problems. Requires much help with personal care. Cannot be left alone at all.

2. Thought Disorder (Due to dementia or drug intoxication)

II. ACTIVITIES OF DAILY LIVING (for both “on” and “off”)

0 = Normal.
1 = Somewhat slow and clumsy, but no help needed.
2 = Can cut most foods, although clumsy and slow; some help needed.
3 = Food must be cut by someone, but can still feed slowly.
4 = Needs to be fed.

0 = Normal.
1 = Somewhat slow, but no help needed.
2 = Occasional assistance with buttoning, getting arms in sleeves.
3 = Considerable help required, but can do some things alone.
4 = Helpless.

0 = Normal.
1 = Somewhat slow and clumsy, but no help needed.
2 = Can turn alone or adjust sheets, but with great difficulty.
3 = Can initiate, but not turn or adjust sheets alone.
4 = Helpless.

0 = Normal.
1 = Mild difficulty. May not swing arms or may tend to drag leg.
2 = Moderate difficulty, but requires little or no assistance.
3 = Severe disturbance of walking, requiring assistance.
4 = Cannot walk at all, even with assistance.

16. Tremor (Symptomatic complaint of tremor in any part of body.)

21. Action or Postural Tremor of hands

22. Rigidity (Judged on passive movement of major joints with patient relaxed in sitting position. Cog-wheeling to be ignored.)

0 = Absent.
1 = Slight or detectable only when activated by mirror or other movements.
2 = Mild to moderate.
3 = Marked, but full range of motion easily achieved.
4 = Severe, range of motion achieved with difficulty.

25. Rapid Alternating Movements of Hands (Pronation-supination movements of hands, vertically and horizontally, with as large an amplitude as possible, both hands simultaneously.)

26. Leg Agility (Patient taps heel on the ground in rapid succession picking up entire leg. Amplitude should be at least 3 inches.)

27. Arising from Chair (Patient attempts to rise from a straight-backed chair, with arms folded across chest.)

0 = Normal.
1 = Retropulsion, but recovers unaided.
2 = Absence of postural response; would fall if not caught by examiner.
3 = Very unstable, tends to lose balance spontaneously.
4 = Unable to stand without assistance.

IV COMPLICATIONS OF THERAPY (In the past week)

32. Duration: What proportion of the waking day are dyskinesias present? (Historical information.)

33. Disability: How disabling are the dyskinesias? (Historical information; may be modified by office examination.)

34. Painful Dyskinesias: How painful are the dyskinesias?

36. Are “off” periods predictable?

37. Are “off” periods unpredictable?

38. Do “off” periods come on suddenly, within a few seconds?

39. What proportion of the waking day is the patient “off” on average?

40. Does the patient have anorexia, nausea, or vomiting?

41. Any sleep disturbances, such as insomnia or hypersomnolence?

42. Does the patient have symptomatic orthostasis? (Record the patient’s blood pressure, height and weight on the scoring form)

100% = Completely independent. Able to do all chores without slowness, difficulty or impairment. Essentially normal. Unaware of any difficulty.
90% = Completely independent. Able to do all chores with some degree of slowness, difficulty and impairment. Might take twice as long. Beginning to be aware of difficulty.
80% = Completely independent in most chores. Takes twice as long. Conscious of difficulty and slowness.
70% = Not completely independent. More difficulty with some chores. Three to four times as long in some. Must spend a large part of the day with chores.
60% = Some dependency. Can do most chores, but exceedingly slowly and with much effort. Errors; some impossible.
50% = More dependent. Help with half, slower, etc. Difficulty with everything.
40% = Very dependent. Can assist with all chores, but few alone.
30% = With effort, now and then does a few chores alone or begins alone. Much help needed.
20% = Nothing alone. Can be a slight help with some chores. Severe invalid.
10% = Totally dependent, helpless. Complete invalid.
0% = Vegetative functions such as swallowing, bladder and bowel functions are not functioning. Bedridden.