Following is the list of 21 disabilities as per RPWD Act 2016. Please note that different countries may have identified a similar but not the same set of condition for providing benefits to persons with disabilities.

Blindness is defined as the state of being sightless. A blind individual is unable to see. In a strict sense the word blindness denotes the condition of total blackness of vision with the inability of a person to distinguish darkness from bright light in either eye.

Low-vision means a condition where a person has any of the following conditions, namely:

Leprosy, also known as Hansen’s disease (HD), is a chronic infectious disease caused by a bacteria called Mycobacterium leprae. The disease mainly affects the skin, the peripheral nerves, mucosal surfaces of the upper respiratory tract and the eyes. Leprosy is known to occur at all ages ranging from early infancy to very old age. About 95% of people who contact M. Leprea do not develop the disease.

Hearing impairment is a partial or total inability to hear. It is a disability which is sub-divided in two categories of deaf and hard of hearing.

Strictly speaking Locomotor Disability means problem in moving from one place to another — i.e. disability in legs. But, in general, it is taken as a disability related with bones, joints and muscles. It causes problems in person’s movements (like walking, picking or holding things in hand etc.)

Dwarfism is a growth disorder characterized by shorter than average body height.

Intellectual disability, also known as general learning disability and mental retardation (MR), is a condition characterized by significant limitation both in intellectual functioning (reasoning, learning, problem solving) and in adaptive behavior which covers a range of every day, social and practical skills.

Mental illness or mental disorder refers to a substantial disorder of thinking, mood, perception, orientation or memory that grossly impairs judgment, behavior, capacity to recognize reality or ability to meet the ordinary demands of life. But it does not include retardation which is a condition of arrested or incomplete development of mind of a person, specially  characterized by sub-normality of intelligence.

Autism Spectrum Disorder (ASD) is a neurological and developmental disorder which affects communication and behavior. Autism can be diagnosed at any age. But still it is called a “developmental disorder” because symptoms generally appear in the first two years of life. Autism affects affects the overall cognitive, emotional, social and physical health of the affected individual.

Cerebral Palsy (CP) is a disabling physical condition in which muscle coordination is impaired due to damage to the brain. It occurs at or before child birth. Cerebral Palsy is not a progressive condition; meaning it does not get worse with time. However, muscle disuse could increase the extent of disability over the period of time. At present there is no cure available for this condition. Thus, Cerebral Palsy is incurable and life-long condition, at present.

Muscular Dystrophy (MD) is a group of neuromuscular genetic disorders that cause muscle weakness and overall loss of muscle mass. MD is a progressive condition; meaning that it gets worse with the passage of time.

Specific Learning Disabilities is a group of disabling conditions that hampers a person’s ability to listen, think, speak, write, spell, or do mathematical calculations. One or more of these abilities may be hampered.

In Multiple Sclerosis (MS), the immune system of body attacks the Central Nervous System, which includes brain and spinal cord. As a result of MS, the myelin sheath covering on neurons gets damaged. This exposes the nerve fiber and causes problems in the information flow through nerves. With time, MS can lead to the permanent damage to nerves. 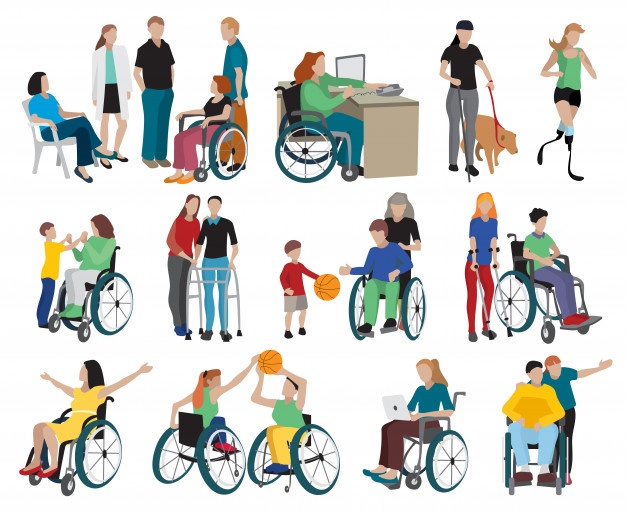 A permanent disability arising out of conditions such as laryngectomy or aphasia affecting one or more components of speech and language due to organic or neurological causes.

Thalassemia is a genetically inherited blood disorder which is characterized by the production of less or abnormal hemoglobin. As we know, hemoglobin is a protein found in Red Blood Cells. Hemoglobin is responsible for carrying oxygen around in the body. Thalassemia results in large numbers of red blood cells being destroyed, which leads to anemia. As a result of anemia, person affected with Thalassemia will have pale skin, fatigue and dark coloration of urine.

Hemophilia is a blood disorder characterized by the lack of blood clotting proteins. In the absence of these proteins, bleeding goes on for a longer time than normal. Hemophilia almost always occurs in males and they get it from their mothers. Females are rarely affected with hemophilia.

Sickle Cell Disease is a group of blood disorders that causes red blood cells (RBCs) to become sickle-shaped, misshapen and break down. The oxygen-carrying capacity of such misshapen RBCs reduce significantly. It is a genetically transferred disease. Red Blood Cells contain a protein called hemoglobin. This is the protein that binds oxygen and carry it to all the parts of the body.

Multiple Disabilities is the simultaneous occurrence of two or more disabling conditions that affect learning or other important life functions. These disabilities could be a combination of both motor and sensory nature.

An acid attack victim means a person disfigured due to violent assaults by throwing of acid or similar corrosive substance.

Parkinson’s disease (PD) is Central Nervous System disorder which affects movement. Parkinson’s disease is characterized by tremors and stiffness. It is a progressive disease, which means that it worsens with time. There is no cure available at present.